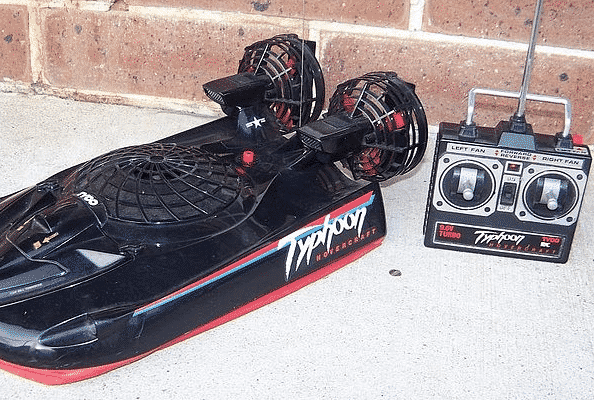 Today we are having a little bit of fun as we put on our nostalgia goggles and look at the Remote Control (RC) Tyco Typhoon Hovercraft and give it a little review. For most of you reading this you will be familiar with this RC hovercraft made by Tyco.

We are sure some of you at some point are going to click your fingers and say “oh yeah I remember that, I had one as a kid”, or if you were not that lucky, maybe one of your buddies had one? Anyway let’s have a closer look at one of the (if not the) first proper RC hovercrafts in our Typhoon Hovercraft review!

First of all this was a popular kids, teenagers and even adults toy back in the day. You could argue that it was one of the first things that blurred the line between being something for kids and also something us adults could enjoy.

While marketed towards children, the Tyco RC Typhoon Hovercraft was also very popular with adults as it was so much fun to use. We’re sure many dads bought this for their kids as an outdoor summer toy, but secretly they had an eye on playing with it themselves.

Even though this is one of the first models of an RC hovercraft it does actually handle very well. If you fire up a YouTube video, you will be impressed at not just how fast this can go, but also the way it can turn on a dime and in general just be a lot of fun to use.

Clearly more modern RC hovercrafts will have more bells and whistles, being able to do far more than this one can, but the value is in it being a collectable retro item. That being said, the Tyco Typhoon Hovercraft is no slouch in the performance department and considering it’s age, it is pretty amazing.

While not exactly a performance feature, ‘the lift’ is something we feel that we have to touch upon in our Typhoon Hovercraft review. What is the lift? When you fire up the Typhoon Hovercraft the airbag inflates and it looks absolutely awesome!

Again this really does nothing for the actual driving of the RC hovercraft, but it is a really cool feature. Seeing the bag inflate for the first time is surely a happy memory for anyone who was lucky enough to race one of these bad boys back in the day.

When using the Typhoon Hovercraft it is impossible not to have a big smile on your face the whole time you are racing it. That’s a very general statement, but oh so true! Well, my buddy Iain did not have a smile on his face when I took his Typhoon Hovercraft off road onto the gravel when we were kids, but fortunately the airbag survived!

What was the point of that story? It shows you that even though this was a rather early RC Typhoon Hovercraft, it was very well made and the airbag (while not perfect) could take a bit of punishment.

Speaking of which the body of the hovercraft looked great, but it was also made very well. Of course, it is not as strong as what a modern RC hovercraft is made from, but back then this was top of the line stuff.

As cheesy as it sounds, we feel that we have to mention in this Typhoon Hovercraft review how this really paved the way for RC hovercrafts. We are not saying that this was the very first RC hovercraft, even though back in the day this was the claim made by Tyco, but it was certainly one of the first to capture kids attention from all over the world.

It was a rather expensive RC vehicle in its day, but most people who had one felt that they were getting very good value for money.

A Couple Of Things We Were Not Super Happy About

While it would be unfair to make comparisons to modern RC hovercrafts, as the Tyco version is 20 years older, there are still a couple of things that could have been improved.  First of all the airbag. Although revolutionary and very durable as demonstrated with my buddy Iain, it can actually tear.

You can get replacement ones, but fitting a new one can be a pain. Some people reported that back in the day certain stores would offer an extra airbag with the purchase of a brand new Tyco Typhoon Hovercraft. Which if they did was really cool.

The other thing that we have to mention is the battery life. To be fair you are going to be able to race around with this for a long while, certainly just as long as a lower priced RC hovercraft that you would buy today. But the Tyco Typhoon Hovercraft requires a long charging time.

Obviously 20 years ago the expectation was to have to charge it when we were in bed so we could play with it in the morning, but by today’s standards that kind of charge time is kind of crazy. We are sure some people have pimped these out with all new parts, including a new kind of battery and charger. But most folks will be buying these from eBay as is and will have to get used to the lengthy charge times. Still though, isn’t the longer charge time part of the retro fun?!

Should I Track Down A Tyco Typhoon Hovercraft on eBay?

On one hand the first answer that pops into our minds is yes the Tyco Typhoon RC Hovercraft is awesome. But is it only awesome if you played with it or knew about it when you were a kid? We think the answer to that might be a yes, especially when compared to newer more sophisticated models.

We had a lot of fun racing around the Typhoon Hovercraft and more than a few people commented on how they had one, knew someone who had one or just remembered the commercials and got a kick out of seeing one after all these years. If you want to share with your child something cool you had as a kid then no doubt you will have a lot of fun with the Tyco Hovercraft.

We made sure to have a good look around the internet to see what a Tyco Typhoon Hovercraft is going for these days and surprisingly you can get one for under 100 bucks pretty easily! We even saw a few that were still new in box, but these had quite the hefty price tag which is to be expected.

But if you are feeling all nostalgic and want to have a blast of one of these again the good news is that it is not going to cost all that much. 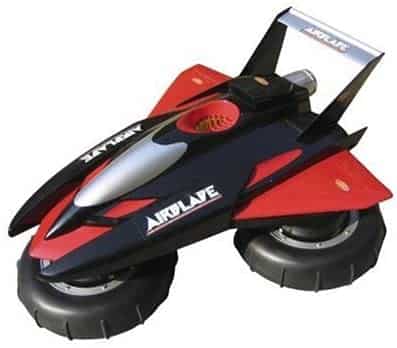 We had a really good time with this and it sure was a lot of fun. Clearly things are better made today, charge faster, go faster and can go on more terrain etc. But there is no denying that the Tyco Typhoon Hovercraft has a real charm and played a huge part in shaping the RC hovercraft landscape that is around today. If you see one cheap, we say pick it up as you will have a great time, once you have waited for it to charge that is.