This post may contain affiliate links, we may receive a commission if you make a purchase using these links. As an Amazon Associate I earn from qualifying purchases.

There is not a kid in this world who is not obsessed with dinosaurs. I believe we all can safely bet that kids know more about dinosaurs than adults. What better way to entertain them than with a remote control dinosaur that flashes its big sharp teeth and stomps its bulky feet?

I ordered a couple of such toys to test myself. And after playing with them for a couple months, below are the ones I highly recommend. So, let’s take a look at the best remote control dinosaur toys you can get for your kids this year.

First up is this awesome robot dinosaur toy from Zoomer. Below is my own remote control dinosaur toy that I have named Terror Rex! It is a really cool toy and I have seen kids engaged with it for hours. 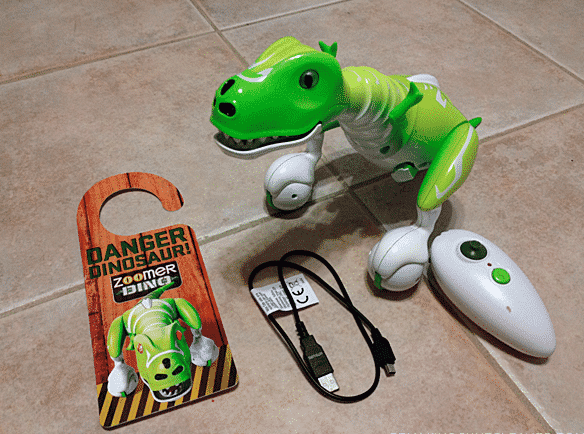 Like all Zoomer robotic toys, its main attraction lies in its ability to learn new commands and execute new actions. I have fun watching it explore and do all sorts of crazy things like roar, burp and fart. It can even laugh at itself! Its algorithm has been designed such as to make it a quick learner, therefore kids really appreciate such a toy that can mimic their actions.

Another fun fact about Zoomer’s dinosaur toy is its ability to keep itself balanced. It can even pick itself up if it topples forward. However, if it falls sideways, you will need to set it straight yourself.

The walking action is smooth, unlike the cheaper alternatives that don’t walk very well. For that, I think its higher price is justified as it is just a better quality toy all around.

One thing you should note is that you should read the instructions. That helps me get all mileage out of this cool dinosaur toy. If not, you might miss some of the cool things that Terror Rex can do which I have mentioned.

However, there is a certain flaw that I hope can be corrected in the next version. The battery life is a bit limited. Each charge lasts up to 40 minutes after an hour of charging so kids might get impatient. To know that the toy is fully charged up, look at its eyes. Green means it is ready to go!

Despite the flaw, I still love my robot dinosaur Terror Rex, and your kids will love it just as well! 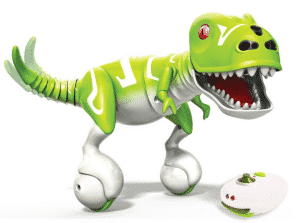 Another model I bought is the Wow Wee remote control robot dinosaur toy. It is more Transformer looking than the Zoomer version and has some really cool features as well. 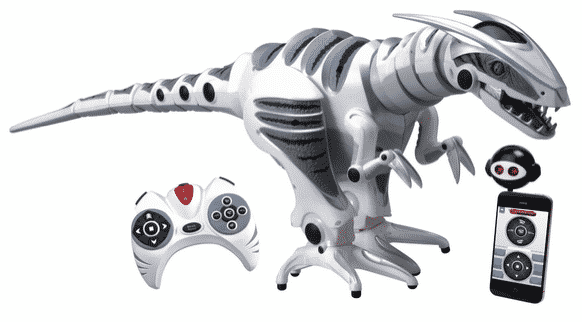 One of the most obvious differences between the Zoomer version and this is the speed at which the toy moves. As you can see from the images, the Wow Wee version has actual legs instead of wheels, so it moves slowly. However, it is a more realistic walk and depending on what your kid likes, there is a difference in the basic movement for the two dinosaur toys.

Regarding intelligence, I will say the Zoomer has a slight edge in terms of the commands and actions it follows. However, don’t let that take anything away from the Wow Wee. I played it for some time and its range of actions is still impressive. For any 6-year-old and above kid, it should be entertaining enough for hours.

A cool thing about the Wow Wee remote control toy is that it comes with two types of remote control. The first is a standard remote control, and the other can connect to your smartphone allowing your child to control their dinosaur with their phone or tablet.

Unlike the Zoomer, the Woo Wee dinosaur toy is not rechargeable as normal batteries power it.

Overall, it is cool robot dinosaur toy and should appeal to kids who love big toys.

This remote control dinosaur comes with a wireless controller, and roars with just one touch. The soft skin means you can really take advantage of in sensory activities for children. It has a built in speaker that sounds almost like a real dinosaur, enough to scare your friends. 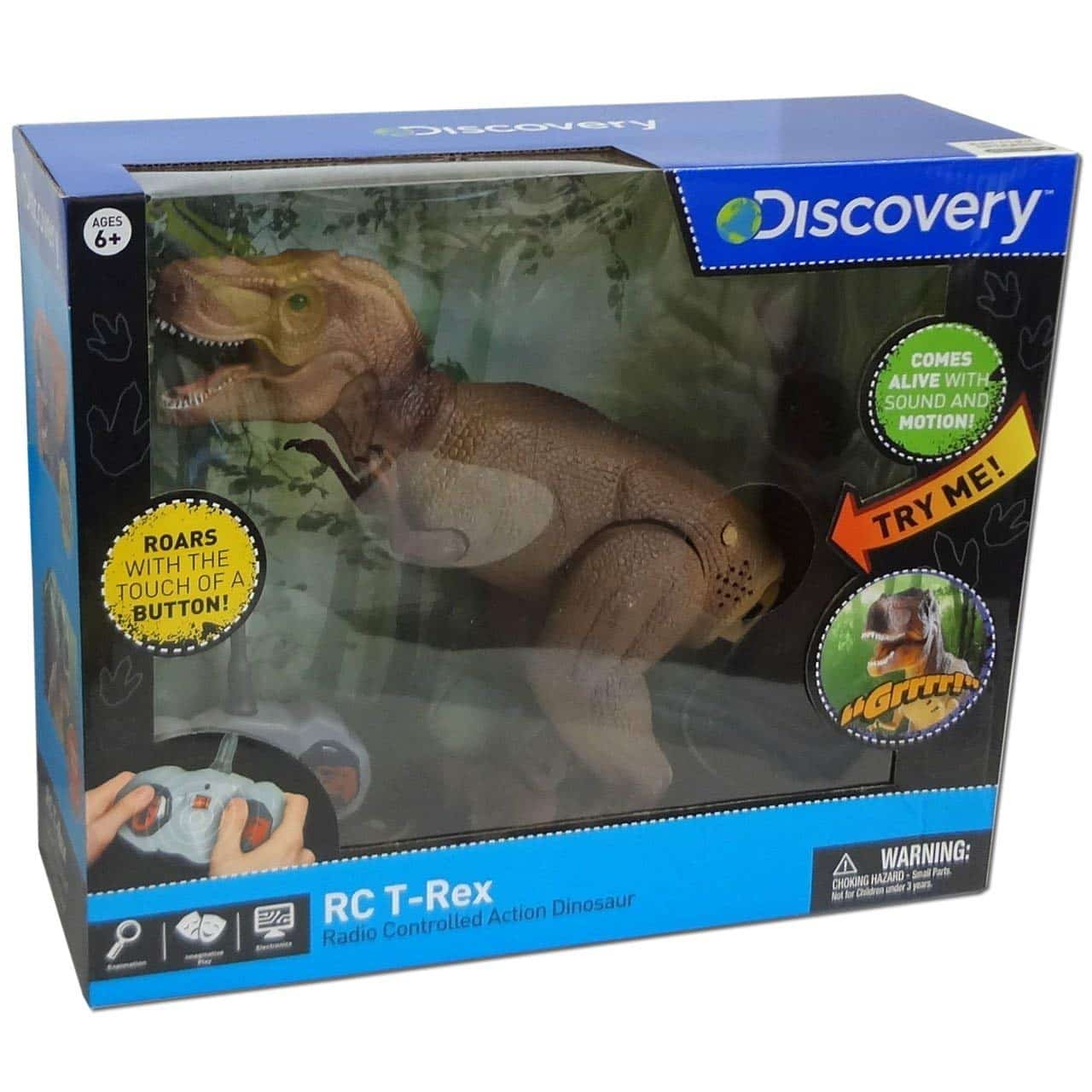 At 16 inches, this dino is half the size of Wow Wee, but it also costs a lot less. 3 AA batteries are included in the package which is a great thing, because it’s such a nuisance to have to get separate batteries for such toys.

Otherwise complete, this dino only requires you to do a bit of work on its tail. But it is good to go after just a few minutes of assembly. Because of its simplicity and easy operation, this toy is better suited for little kids.

Children love anything that roars, and this little dino is sure to be their next favorite toy. You might need to get earbuds because they will be making this robot dinosaur toy roar all day! 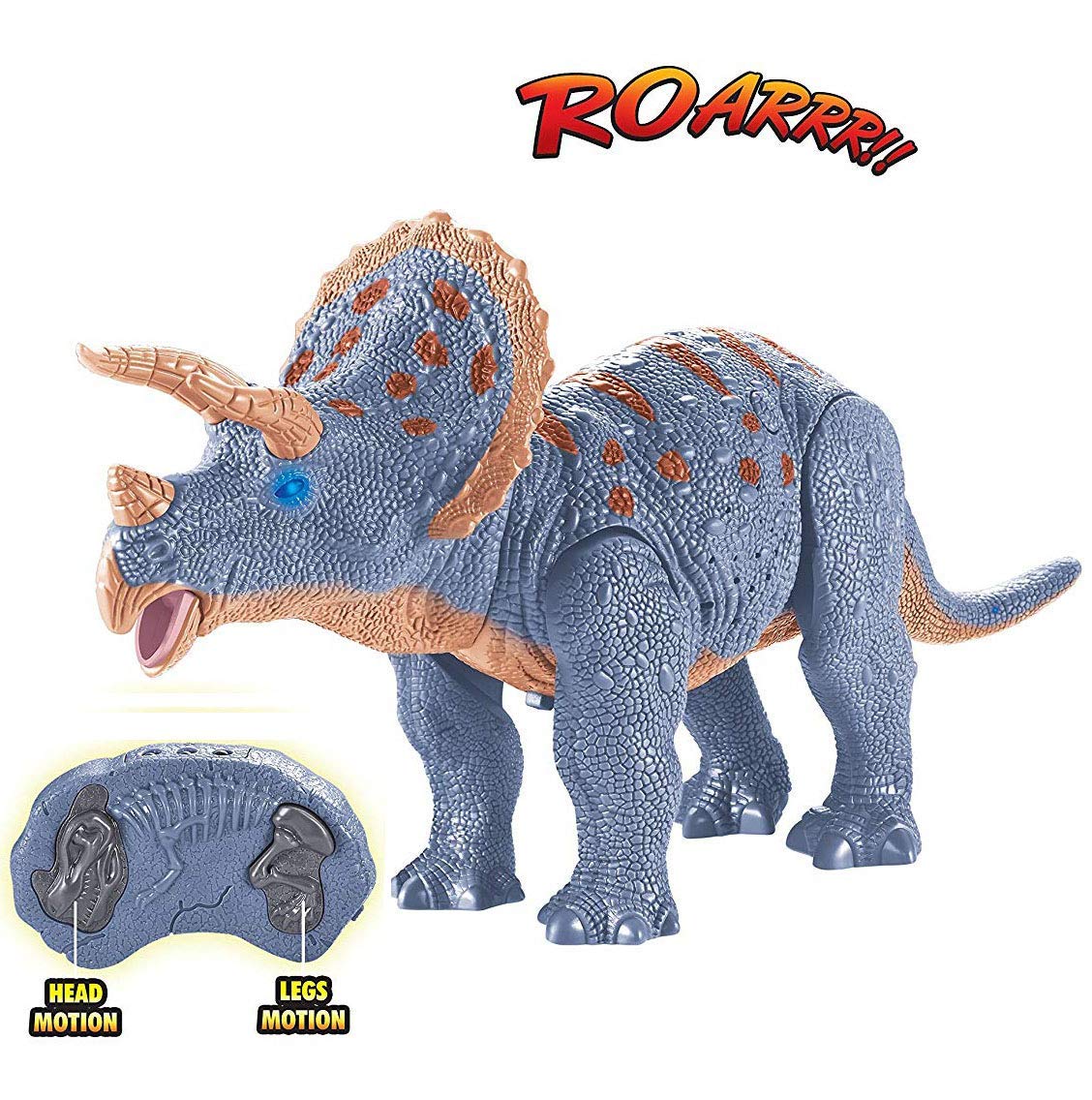 This robot dinosaur toy has an excellent texture that looks almost real. Kids will enjoy touching its scales and feeling all the grooves. This dinosaur can walk, move its head, roar and light up its eyes. How amazing is that! Kids enjoy roaring dinos with brightly lit eyes.

One thing that I really like about this dinosaur toy is that its remote control is shaped like a fossil. It looks really cool and has two controls, for the head and legs. For the other functions, there is a button on the triceratops’ body.

Compared to the other remote control dinosaurs, this one can get pretty loud. Unlike adults, kids have absolutely no problem with loud noisy toys. In fact, they would not ask for anything more.

With missiles and a mist spraying mouth, this T-Rex really is a high tech robot dinosaur toy. I absolutely love its fiery breath feature. 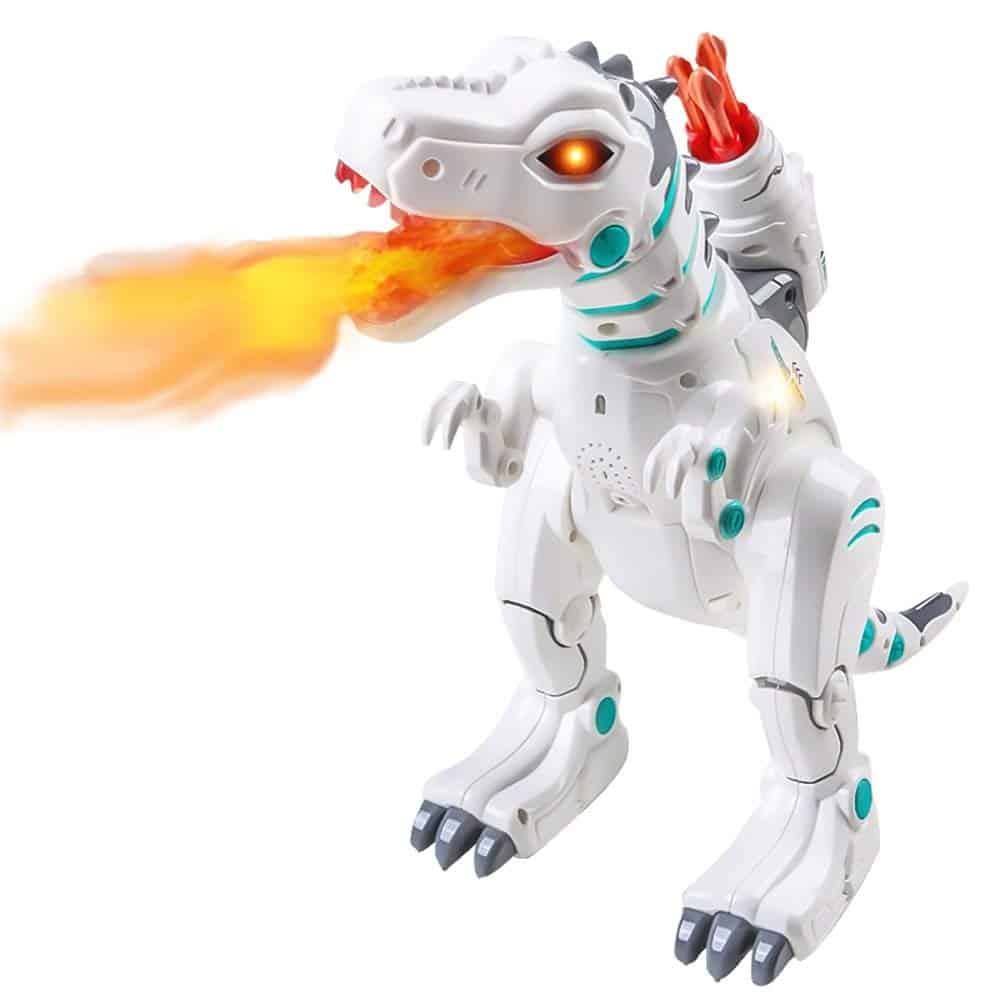 It’s a really intelligent robot dinosaur toy that is certainly going to become your friend and cheer you up when you’re feeling down. Its remote control has got an awesome 33 feet range so you can control the dino from quite a distance as well.

It moves forward and backward, left and right, sings, dances, teaches language, sprays water mist, and launches missiles. That sure is a lot of fun packed in one remote control dinosaur. Whenever you want some entertainment, just have your dinosaur play a song and dance to it.

Featured in our best toys for 5-year-old boys guide, it has a fire breathing option, you have to inject some clean water in the back. That itself is an interesting task for kids. Not only does this dino let you play with it, it also plays with you by testing your knowledge. So, it doubles as an educational toy as well.

It has got quite a lot of funky features, but it takes almost an hour and a half to charge to work for only half an hour. Kids can get pretty fussy waiting for it to get charged so that is something I don’t really like.

I know T-Rex is a popular dinosaur among kids, but they will also be happy to play with this scary little spinosaurus that has glowing eyes. 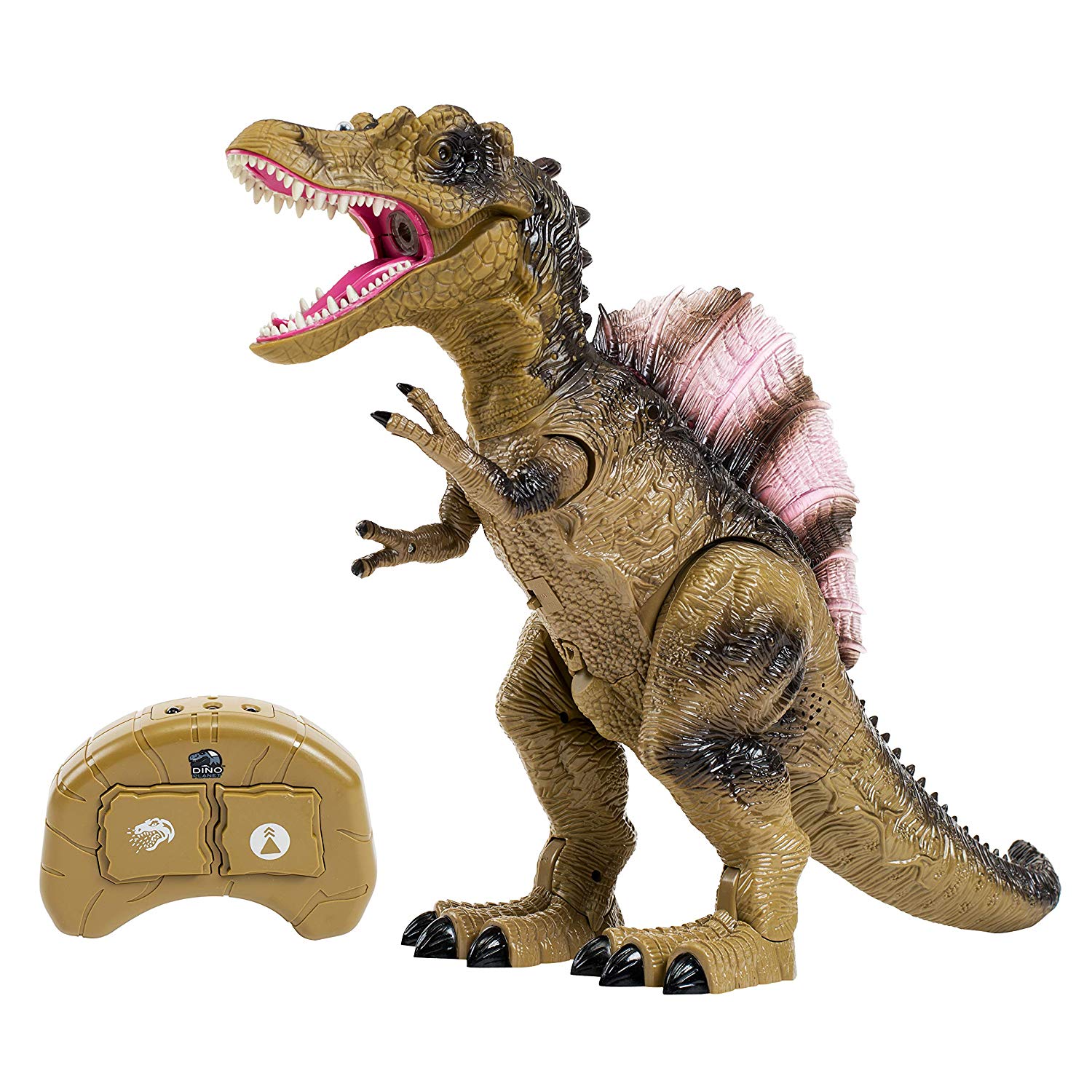 This robot dinosaur toy runs on batteries, and with just the touch of a button, it comes to life, roars, and shakes its head like an angry dino. Beware kids!

It’s a really life-like dinosaur and has an amazing skin that kids can touch for sensory activities. What is even more exciting is that it can breathe mist from its mouth! The electronic pet dinosaur comes with a drop bottle that is used to inject water in the dinosaur for the fiery breath feature.

It can shake its head and has glowing eyes. All you have to do is get the remote control and go back in time to when dinosaurs roamed the planet. 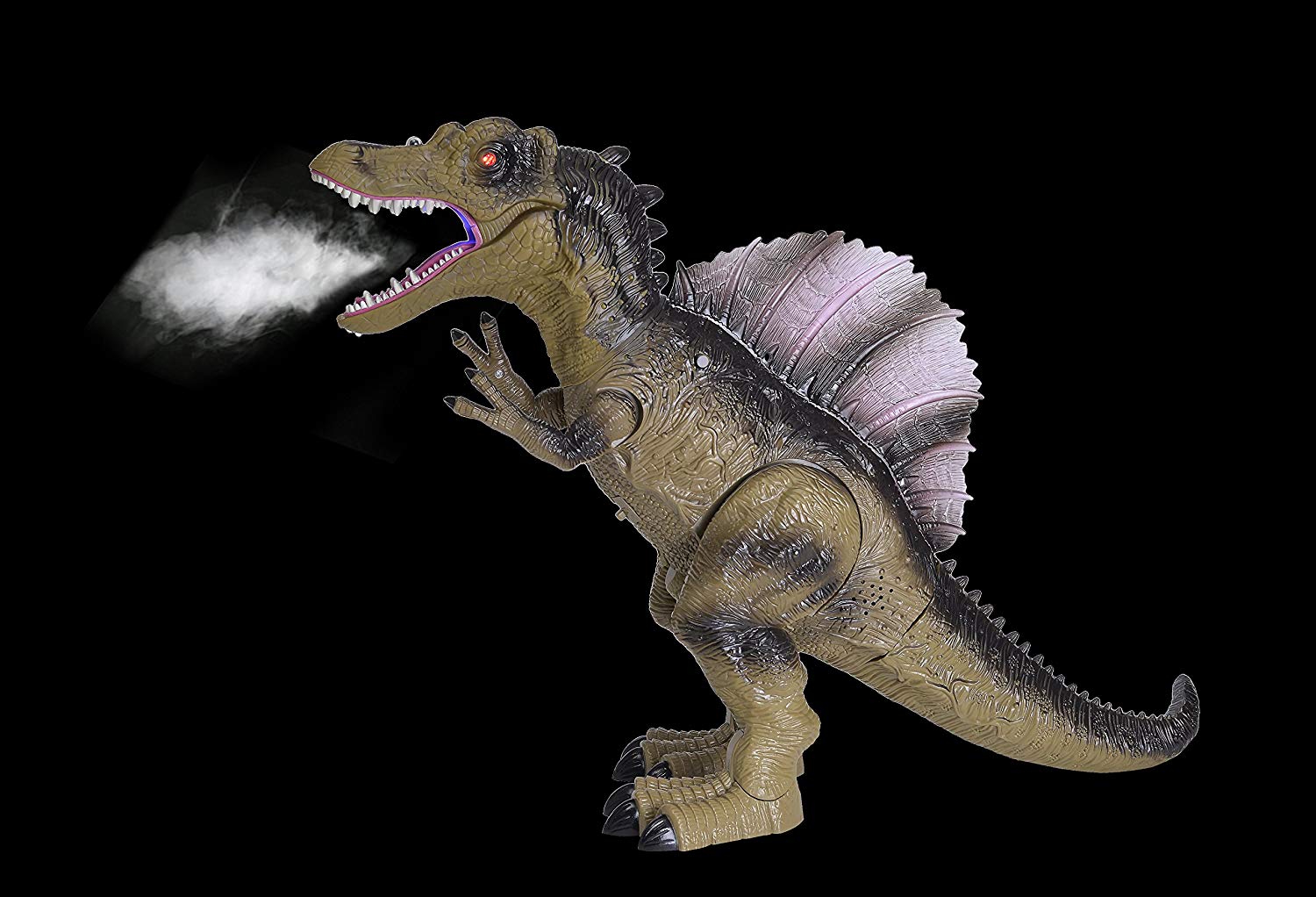 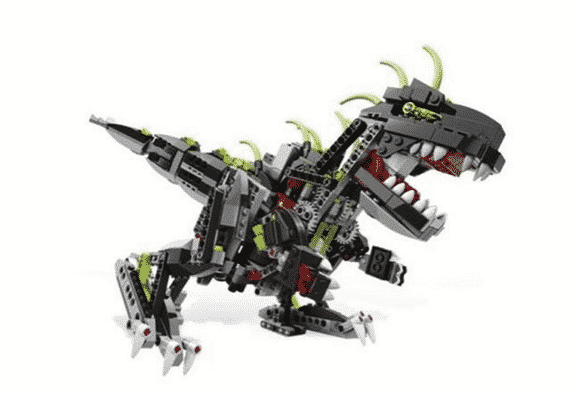 Disclaimer: I got this as a gift for my review but what I said is entirely my opinion.

Out of all the robot dinosaur toys, I spent the most time putting this one together, but hey, that is the whole point of LEGO toys right? Like I said, LEGO fans will have lots of fun assembling the robot dinosaur. It will take some time but they will certainly enjoy every minute of it.

Once assembled, it can do a lot of cool things. For one, you can control it via a remote control which I try to do by banging it against my Terror Rex. Unfortunately, this LEGO dino won and knocked Terror Rex to the floor 🙁

It can also open its mouth and let out dinosaur roars, which adds to the fun of playing with it. Its horns can even shine when in the dark, not that I played in the dark all the time but when the lights are off, it did look very cool.

Finally, it can be reassembled to transform into a crocodile. This is the only dinosaur robot toy that can do that, so I guess it is worth the price since it is two toys for the price of one?

Overall, if you can afford it and your kids love LEGO, this is a great remote control dinosaur toy to buy.

Since most of the robotic dinosaur toys recommended here are T-Rex, I thought it would be educational to dig out some interesting facts about them. You can educate your kids with these fun facts, they will certainly be happy to learn more about these dinos.