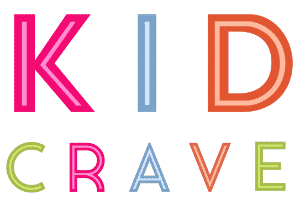 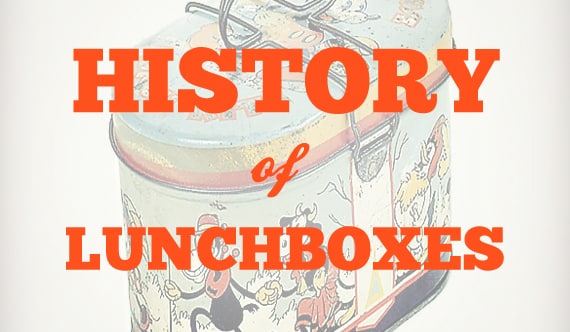 Another back to school season is upon us. And while stores are pushing pens, notebooks, and other school supplies, the smallest students are only concerned with two things: their backpack and their lunchbox. As the eager pupils get ready to make new first day of school memories, this list takes you on a trip back to some of yours. The History of Lunchboxes chronicles how the most exciting late summer purchase got its start and has evolved through the decades. 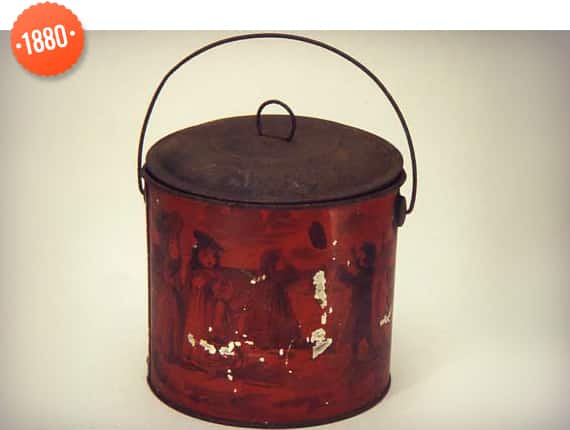 1880’s – In the late 1800s, blue-collar workers carried their lunches to work in metal pails that originally held cigars or cookies (upcycling before it was cool?). Your lunch pail illustrated your place on the economic scale — carrying one meant you couldn’t afford a hot noontime meal. (Source) 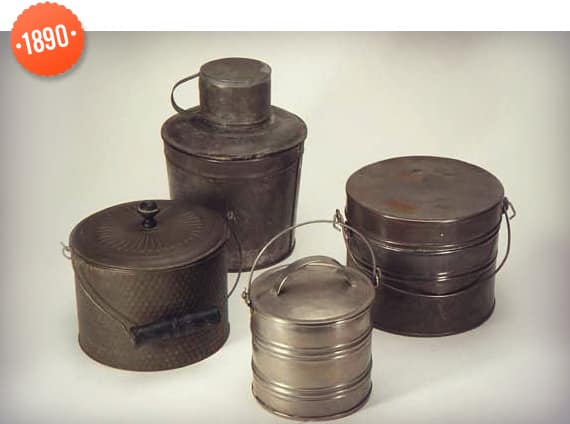 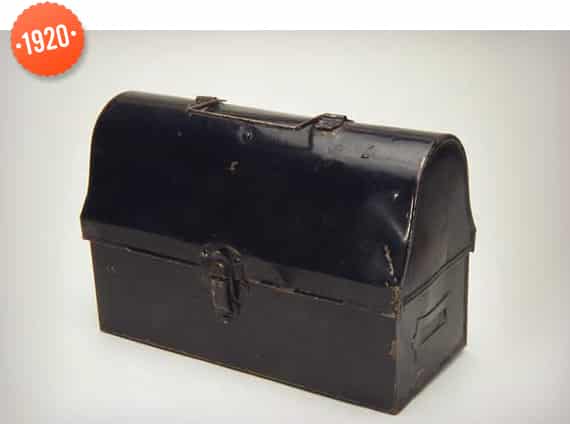 1920s – Later, “thermos” vacuum bottles like the ones we know of today kept workers’ drinks hot or cold until the noon whistle blew. Boxes such as these were made specifically for workers. (Source) 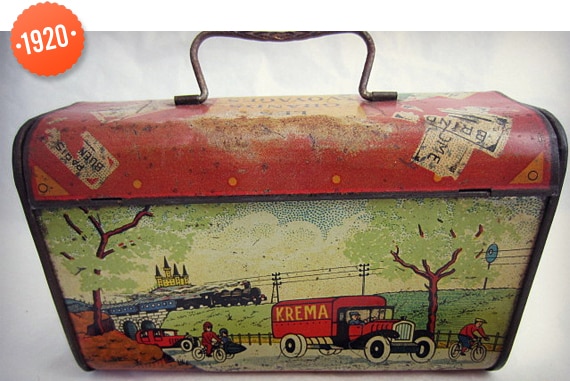 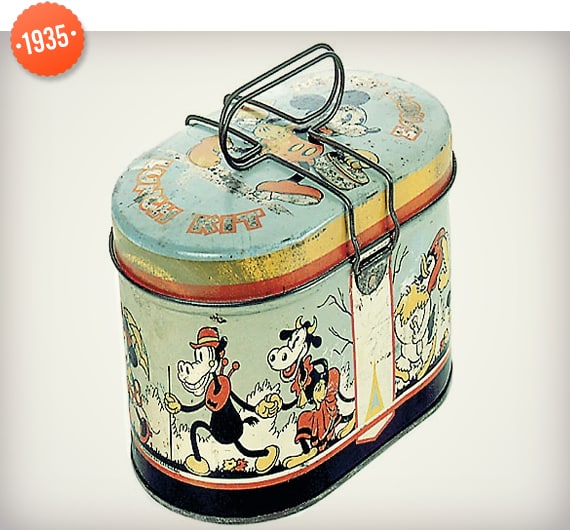 1935 – In 1935, the lunch box as we think of it today was born. That’s when a Milwaukee, Wisconsin, company called Geuder, Paeschke, and Frey licensed the likeness of a new cartoon character named Mickey Mouse for the top of its oblong-shaped “Lunch Kit.” The metal container was sealed at the top with a loop of stiff wire that doubled as a handle. From that moment on, placing a character of any sort on the side of a lunch box. 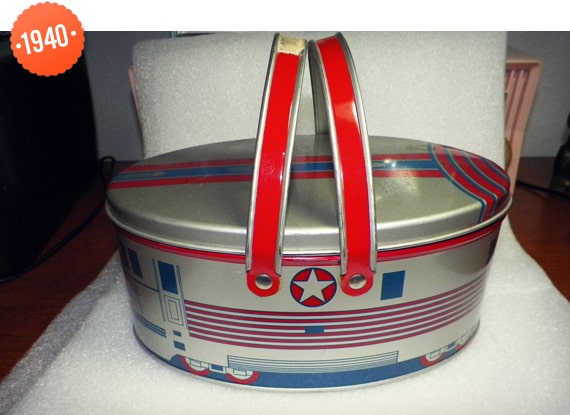 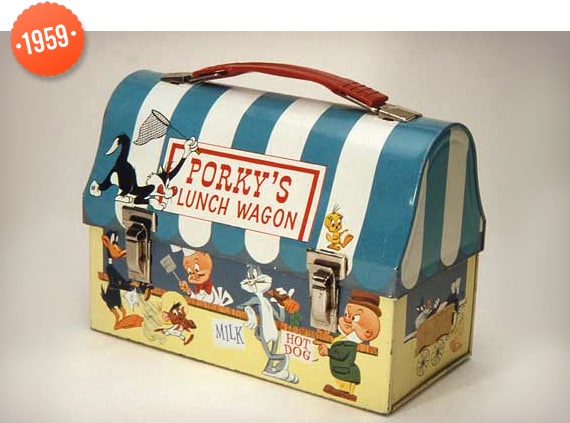 1959 -Television transformed the lunch box from an ordinary food conveyor into a storyteller. By the early 1950s, Aladdin released a lunch box emblazoned with a decal of Hopalong Cassidy. Sales took off and American Thermos soon followed suit. Here, Porky’s Lunch Wagon served up milk, hot dogs, and your usual Sylvester and Tweety hijinks. 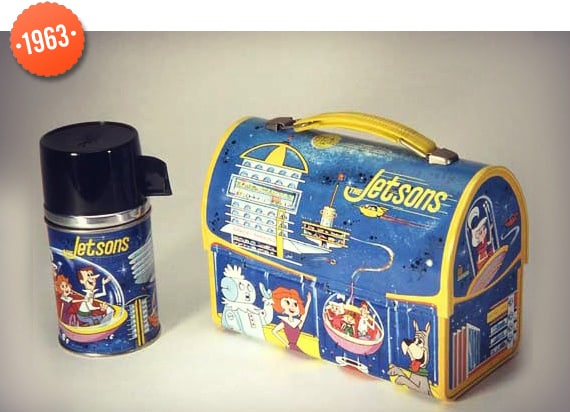 1963 – If you were lucky in the 1960’s, you had a Jetsons Lunchbox. If you were really lucky, your very own Rosie packed it for you each morning. 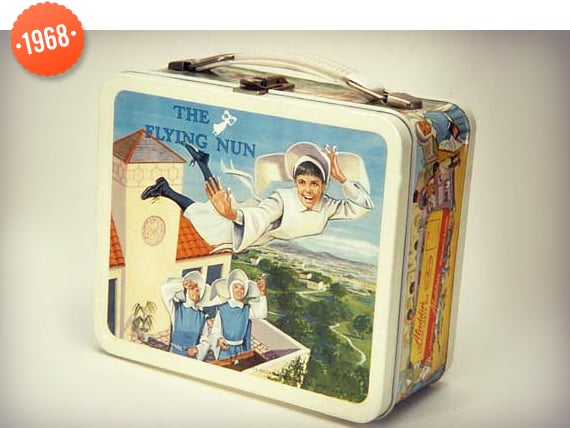 1968 – In 1962, Aladdin further revolutionized the lunch box by embossing the front and back, adding a 3-D effect to the artwork, as seen here in The Flying Nun style. 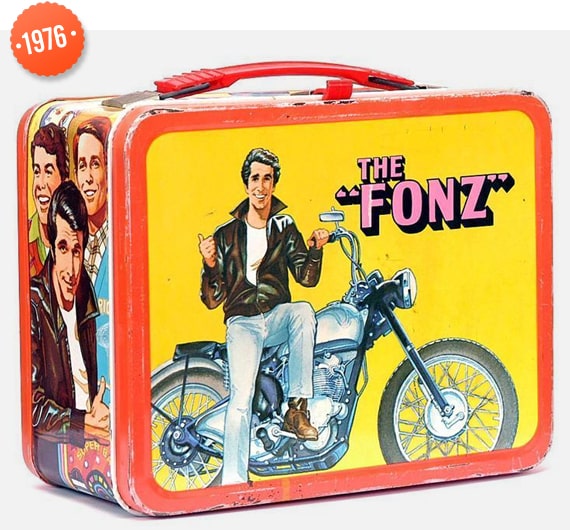 1976’s – Popular characters like the Fonz, in the same square box format, continued throughout the 70’s. Though the lunch box industry was about to undergo another transformation. 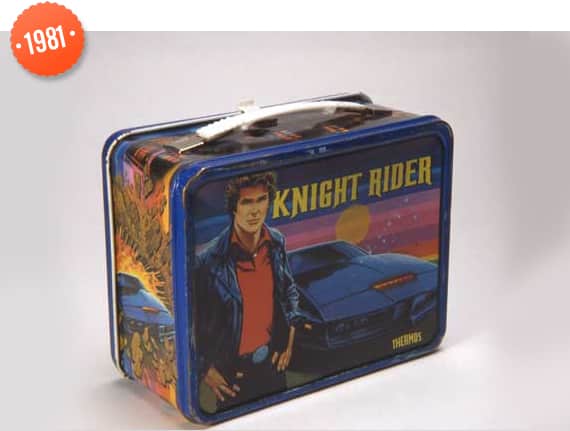 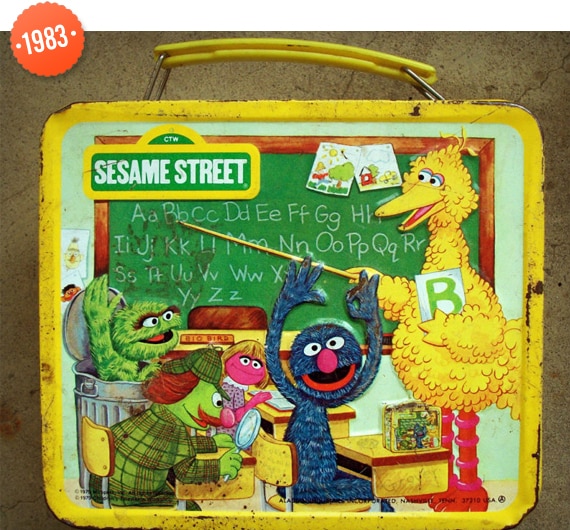 1983 – No lunch box list would be complete without a sample from good ol’ Sesame Street. 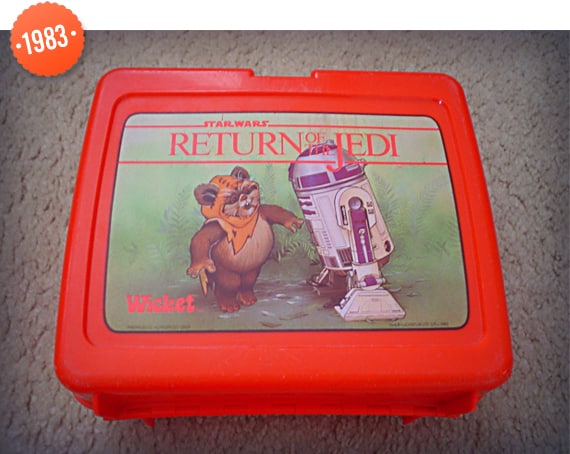 1983 – By the mid-1980s, box makers had replaced steel with less costly synthetic materials like plastic. We’re guessing the proud owners of this Return of the Jedi style didn’t mind. 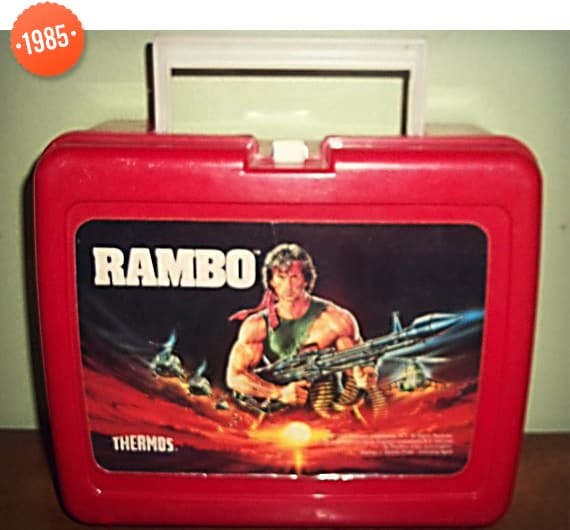 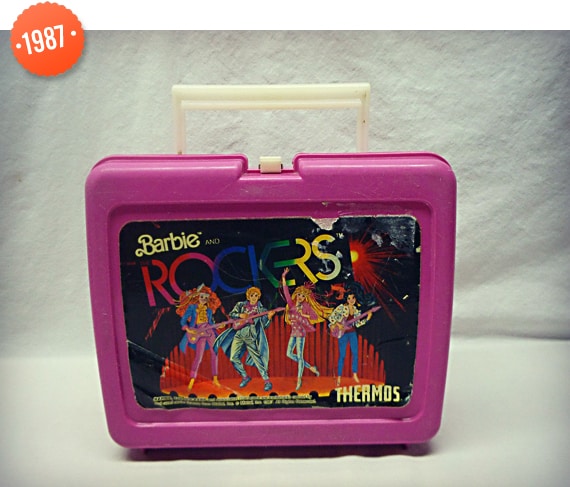 1987 – Many a plastic Thermos box featured Barbie and her friends. Or as seen here, Barbie & The Rockers. 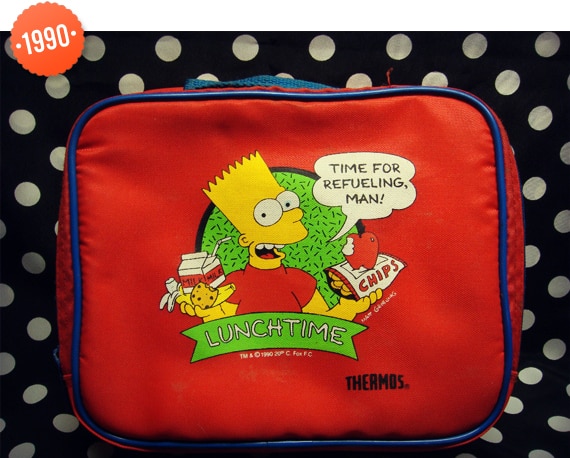 1990 – Soft-sided boxes like this Bart Simpson version appealed to parents and kids because they could be easily stuffed into a backpack for the journey home. 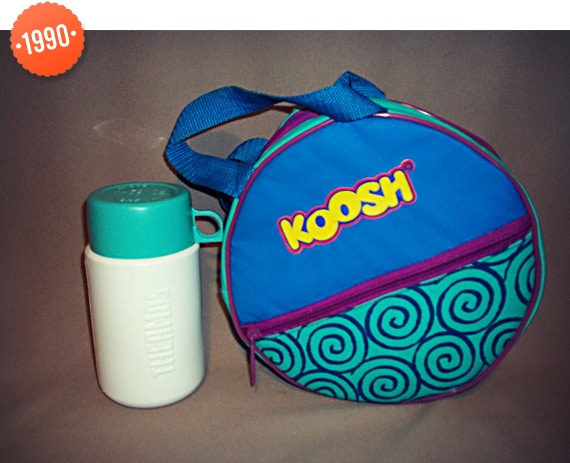 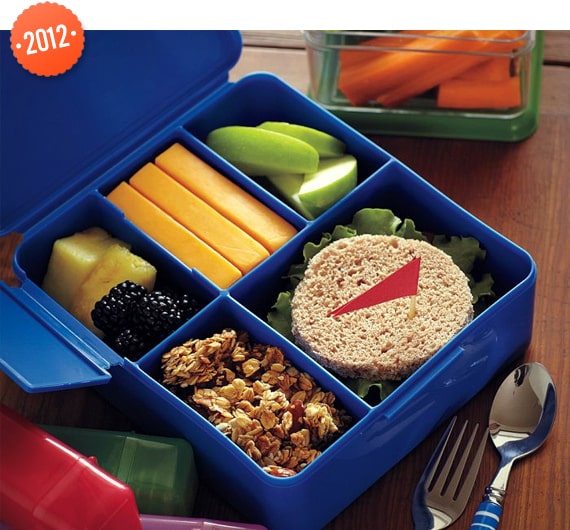 2012 – Today’s kids have a wide variety of lunch box styles to choose from. Moms and dads might opt for Japanese-inspired Bento box containers because their neat sections eliminate the need for plastic baggies and disposable containers, and they allow you to pack many types of food easily. (Link) 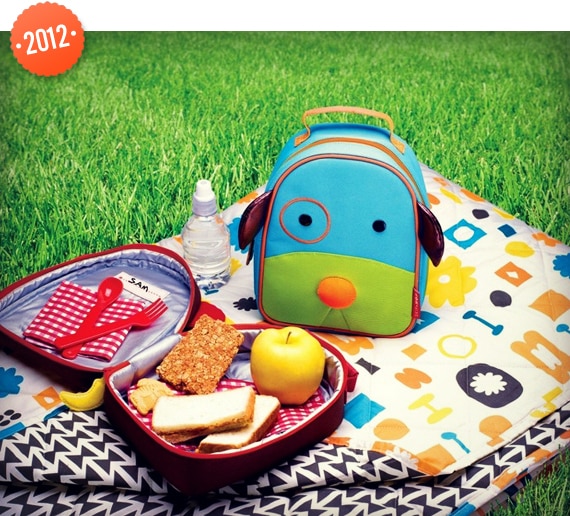 2012 – Neoprene lunch totes, as seen in Built NY products, are fashionable, designed to maintain preferred temperatures, and are completely machine washable in the event of leaks or spills. (Link)

20 Best Outdoor Summer Toys in 2020 for Toddlers and Kids

15 Kid’s Toys Of The Future Your Children Will Love

Motorcycle Rocking Horses Your Kids Will Love in 2020

Best Board Games For Kids And Families

ABOUT ME
Thanks to our highly experienced team we are able to share a range of opinions on the best toys and games for your babies, toddlers, kids and teens. Kidcrave.com provides no guarantees as to the accuracy of the information found on this website. We are a participant in the Amazon Services LLC Associates Program, an affiliate advertising program designed to provide a means for us to earn fees by linking to Amazon.com and affiliated sites.
Contact me: [email protected]
FOLLOW US
© Kidcrave.com uses first and third party cookies on your computer to enhance this site and provide functionality. By continuing to use our site we will assume you accept our use of cookies, as outlined in our privacy policy.