Best Board Games for Kids and Families

This post may contain affiliate links, we may receive a commission if you make a purchase using these links. As an Amazon Associate I earn from qualifying purchases.

I know it can be hard to get kids to play board games these days, especially when the alternative is shooting something on their PlayStation.

However, today I wanted to share with you three awesome board games for kids you and the whole family will love playing together. So keep on reading to see what me and my two boys thought of these games we were given to try out.

Best Board Games for Kids 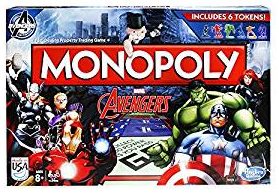 If your house is anything like mine then there has surely been the odd argument that has broken out over a game of Monopoly. Well, Avengers Monopoly is not like any Monopoly you have ever played before!

We went into this expecting a pretty standard game of Monopoly, but with Marvel Superhero pieces, but what we got was far more than that. First thing, the playing pieces. Avengers Monopoly is for one to six players. There is Iron Man, Black Widow, Hawkeye, Hulk, Thor and Captain America.

Each character has their own superpower that they can use once per full trek around the board. Captain America, for example, can use his Shield to block something a player tries to do to him. Black Widow can move up to six extra spaces. Each ability has its own benefit so picking who you play as actually matters.

As you can see the board is round. Instead of trying to get properties, Avengers Monopoly has you trying to capture Marvel Villains. You do this by landing on them and purchasing them like you would a property in regular Monopoly.

Honestly, the boys and I (and mom) had such a great time playing Avengers Monopoly that we played a second game as soon as we finished. If you find regular Monopoly too long and boring then give this a try. The recommended age for this is ages 8 and up. 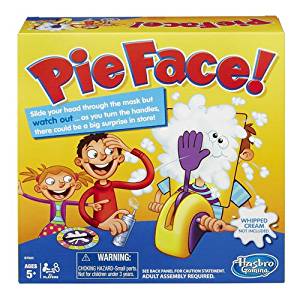 If you have a TV in your house then you have probably seen one of the ten million commercials for this game. Ok so calling it a board game might be a bit of a stretch, but in the last year, Pie Face has been near the top of best board games for kids lists. So is this game as much fun as the commercials make out?

Honestly, yes, yes it is. The idea of the game is very simple. You put your smug face through the gap and slowly turn the dial however many turns the spinner dictates. While it is funny as heck when your other half or one of the kids is the one who could get splatted. Trust me when I tell you that this is nerve-wracking when it is your turn.

Look I know that this game looks stupid….. and it is, but that is the charm of it. Pie Face is the kind of game that is just such a riot and when you have a family game night it is going to be something the kids are genuinely excited to play. One word of warning.

Make sure you have plenty of cream to use with this and stay away from things like shaving cream and anything that can sting if it hits you in the eye. Kids five and up will be able to enjoy this game.

The Game Of Life: Minions Review 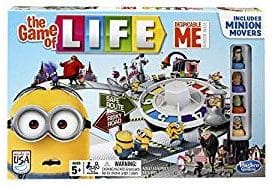 I have tried playing The Game Of Life with my kids a few times and they always get bored before we finish the game. But The Game Of Life Minions, or if you prefer, Despicable Me is not like the classic Game Of Life. As you can see, you get to play as one of four different Minions.

Each Minion has their own personality like the DJ Minion and the DR Minion…. Well, that is what I think they are supposed to be. The idea of the game is that you need to take the safe or the risky road and try and get bananas as you go. The first player to get five bananas wins. It is a pretty simple game and one that does not take too long either.

Like Avengers Monopoly we looked at earlier. This is not like the classic game it is based on a whole lot, but I think that is a good thing. Your kid will have to do all kinds of challenges as there are cards that will be picked up as they play and the kids will have a lot of fun with these.

One thing that makes this fun for a kid is the spinner. What is it by the way with the Game Of Life and a spinner> The spinner adds a bit more fun and unpredictability to the game and for my boys at least, the spinner is a huge highlight. Forget trying to get the kids to play the real Game Of Life.

This Minions version is the way to go and it may actually lead to them being more receptive about playing the classic Game Of Life. This is a pretty simple game so kids ages five and up can play it. This board game is perfect for kids between the ages of 2 – 5 years old.

Things To Know About Buying A Board Game For Kids

I have played a ton of board games with the kids and these are a few of the things that I think you should think about before you put money down for a board game to play with the kids.

Kids Love Characters: I am not just talking about characters like Spider-Man and SpongeBob. But kids really do love board games that have playing pieces that are actual shapes of characters. This is a very easy way to get them excited about a game.

Think Of Length: Many board games these days will tell you how long a typical game can last. Man of the best board games for kids are ones that can be set up and played in around half an hour. Any longer than that and you run the risk of the kids getting fed up.

Board Games Should Be Fun: Above all else when you are picking a board game to play with your children. Make sure that you are looking at ones that are just all about having fun.

Some kids these days see board games as a chore! That should not be the case and if you want to win them over and make family game nights a regular thing then you have to pick games that are fun. Perhaps get them a nice kids treehouse and have a good games night in it.

What Is The Best Board Game For Kids?

This is a tricky one as each of the games on this list is fun in its own right and to be honest I feel that you are onto a winner no matter what one you pick. I do think the Avengers Monopoly is a fantastic game and a game you will be able to enjoy even as they become teenagers, but it may be a little hard for younger kids to grasp.

Pie Face, on the other hand, is a game that can be enjoyed by the whole family and is sure to get you all laughing hysterically.

Minions, on the other hand, has that classic board game feel and while it is aimed at kids as young as five. Kids aged ten would even have a fun time with it. If I was put on the spot and had to pick a game then I would have to say that Avengers Monopoly is the best board game for kids.